Posted By: Oliver Burt on 2nd February 2022 under news 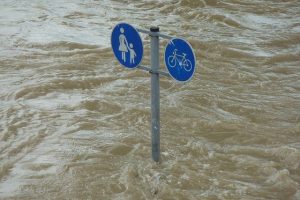 The United Kingdom is an island with a long coastline and many rivers. It is therefore prone to flooding. The risk of flooding, and the intensity of floods, has increased in the last decade due to climate change which as we see ever more clearly, is causing extreme weather events. Urban development also contributes to the increased risk of floods in our beautiful country.

Did you know that…

a) One in every six properties in the UK is at risk of flooding?

b) Statistically, your home is more likely to be flooded than burgled?

c) Approximately 23 million homes in the UK have no form of Home Insurance? Those that do have insurance are often better covered for other risks such as fire and theft.

d) 26% of commercial properties are at risk of flooding, compared to 14% of all properties in the UK?

In this article we identify the worst affected flood risk areas in the UK. If you live in one, you are probably all too clear about the risks you face. However, many of these areas listed grew in popularity in 2021 with thousands of homeowners moving out of our busy cities to the coast and countryside when the Covid pandemic hit.  The potential for flood risks was probably way down on their minds when they viewed the properties that they now own. Perhaps our detailed article below can help with anyone else thinking of making a house move and prompt those already living in an area prone to floods to re-consider their insurance protection.

Cornwall has a long history of flooding due to its geography. The coast features frequent storms and the country is subjected to high levels of rain it receives. At least 12% of Cornwall’s commercial buildings are located in a 200-year flood zone. Sadly storms and floods have caused deaths and injury over the years as well as damage to buildings.2010 was memorable when over 400 properties were destroyed in Cornwall including, tragically, the famous St Austell Market.

Much of the east coast is prone to flooding. Hull in the north east is especially vulnerable being on the banks of an  estuary and at the mercy of volatile tides. It has seen a number of floods throughout the years – tidal flooding in 1953 and 1969 affected properties right in the city centre. A Flood in 2007 caused damage to an incredible 9,000 homes and business properties, and an enormous 95 out of 98 schools were affected!  Great Yarmouth, further south has also been affected by flooding as 2 rivers run through this coastal town. There are now over 10k of flood defences to try to protect the town.

Sussex and Kent suffer from both coastal and river flooding. The worst flood in Sussex history was in 1994, when the River Lavant burst its banks after a torrential downpour causing villages near Bognor Regis to be cut off from road access. Almost 50 residents weree rescued from their homes by boat. Floods of 1953, 2000 and 2001 also turned streets into rivers.

Approximately 20% of all commercial buildings in Sussex and Kent are in its flood zones. Much of the region is now better protected from flooding at a cost of over £2.5bn which has protected more than 50,000 homes in Kent, East Sussex, and parts of South London.

Norfolk is an exposed county, vulnerable to winds and tidal swells caused by the North Sea. It is surrounded by multiple bodies of water, has over 3000km’s of riverfront and seaside and is naturally a low-lying region. It is also susceptible to periods of heavy rain and even mild hurricanes. Unsurprisingly therefore Norfolk has a long history of flash floods. Four lives were lost in 1912 and 15,000 people had their property damaged or destroyed. Norfolk was also severely affected by the Great Flood of 1953, as well as floods in 1978, 2014 and 2020.

The majority of the Somerset region is below sea level. The Somerset Levels and Moors have frequently flooded – the Great Storm of 1703, more storms in 1799 and 1872. In 1919 an area of over 250 km was flooded by a combination of sea and river water which then poisoned the land for over seven years. Since the 1990s, the Environment Agency has rolled out plans to prevent regular winter flooding including giant river pumps.

In terms of rainfall, Essex is pretty dry but parts of it are still at risk of flooding – in particular, Hockley, Canvey, Rayleigh, and Burnham-on-Crouch. Storm surges which are caused by strong winds, push the North Sea towards the coast which fills up the rivers. The Great Flood of 1953 affected thousands of homes, businesses and infrastructure at a cost of what would be £5 billion today. Very sadly, 120 people died.

14% of all Essex’s commercial buildings are in its 200-year flood zone.

Cumbria is exposed to the warmer air of the mid-Atlantic which causes moisture. Add to this a hilly/mountainous landscape and it means Cumbria is the wettest region in the whole of England. What a title to brag about! Floods in 2009 and 2015 were the worst floods in more than half a century. Storm Desmond in 2015 saw more than 50,000 properties severely damaged or destroyed and one person lost their life. With 18% of Cumbria’s commercial buildings lying within flood zones, many of those affected were essential businesses and service providers.

Six places in Lincolnshire have been named among the UK’s most likely places to flood. These include, Lincoln, Gainsborough, Woodhall Spa, Boston, Holbeach and Skegness. Most of the region lies 5m below sea level, with many of its rivers located above the land. Lincolnshire experiences a lot of rain which quickly fills up its rivers and can overflow onto its low-lying floodplain. Lincolnshire has flooded multiple other times over the past decades, including 2007 when 400 homes were evacuated, and 120 people had to be rescued by boat.

Yorkshire has many rivers, waterways, and low-lying moors. Pictures of York under water are common on the news, often featuring the 17th Century pub The Kings Arms beside the River Ouse which features a measure showing how far the water has risen in previous floods. In the East Riding region of Yorkshire alone, a large number of commercial buildings are located within a 200-year flood zone, 37%.

While most flooding incidents cannot be prevented, taking out Flood Insurance certainly helps you to cope with the aftermath. At Acer Insurance we can help you to find the right level of cover for you with the right policy.  Our friendly and knowledgeable team will be there to handle your claim with kindness and consideration should the worst case arise. Contact us on info@acerinsurance.co.uk